THE BEST WAY TO GET REAL ACTIVE FOLLOWERS:

It's no secret that social media channels with only a few followers don't get a lot of engagements and people don't follow you if you only have 500 or less followers. But if you have a lot of followers, likes and comments, is more likely that people will follow you just because they see that a lot of other peoples followed you also.Social Media is a great place to promote your products, projects or just yourself. You will reach real active users, they will follow, like, comment and share your content with the world. This is a awesome way to get more customers for your product or just more attention from the social media. So you can lean back and keep focused on your next post while your last goes viral.This Service is 100% safe and it won't infringe the policy of your social media channels. The Traffic is Monetizable so you can get paid for advertising other products. just chose your social media plattform pick a package and go viral.www.sfreimarketing.com
at March 29, 2018 No comments:

Writer on several self-development books, Micheal Khatkar will blow away your mind with his different style of writing. He has worked in several careers involving personal development, making him an expert in writing anecdotes on these topics. Even though some stories had the same meaning it is that way they are written that enter deep within the soul with vital life-changing messages.

Check him and his books out here. 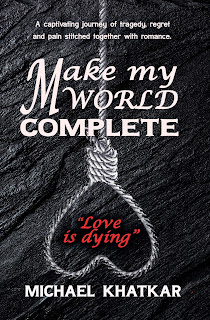 Love is Blindness (Jack White U2 Cover) by Morissa Schwartz

Love is Blindness (Jack White U2 Cover) by Morissa Schwartz I love this song so much. What I am most thankful to the Great Gatsby movie for is inspiring Jack White to cover this song! So powerful.
at March 25, 2018 No comments:

Email ThisBlogThis!Share to TwitterShare to FacebookShare to Pinterest
Labels: Love is Blindness (Jack White U2 Cover) by Morissa Schwartz 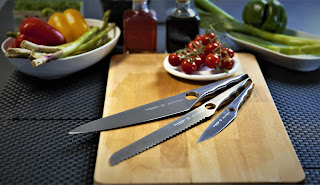 "A chef’s most important tool is his knife, that’s why we’ve created an outstanding and unique design that opens a new era for kitchen knives. The Achilles knife set features a uniquely designed handle that fits perfectly into your hand and provides the best possible grip, even if you hands, or the knife itself are wet."

Meet Steven Kramer Flint, Michigan State Trooper. This 44-year-old officer has been working in the Community Service Trooper department for the last 3 years, and specializing in human trafficking. Kramer became motivated by human trafficking and joined the Genesee County Human Trafficking task force. He teaches juveniles how to be aware of their surroundings, and how not to fall victim to these horrible problems. As human trafficking has no race, color or age, anybody near them can prey young teenagers into falling. Most of the victims, as Kramer expresses are runaways or juveniles with economic problems or lack of parenting. 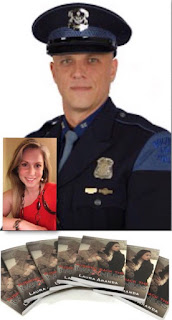 Jo Weber is the author of Last Mile (with Chris Jordan), which compiles her research as founder of Follow Me Post - a startup which aims to solve the problem of missed deliveries. A former music journalist for titles such as Metal Hammer and Rock Sound, Jo has also contributed to Band:Smart (ed. Martin Atkins) and 101 Albums You Should Die Before You Hear (ed. Everett True). 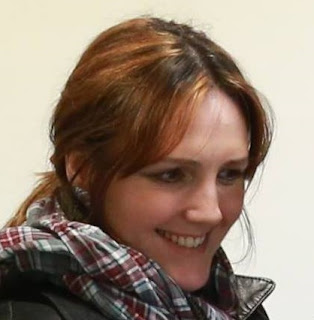 Great to meet you! You sure do a lot, and it seems like you truly follow your passions. How did you discover these passions?
I grew up during the post-punk DIY era of indie labels and low-budget films, so if you wanted something to exist, you just went ahead and did it. I was raised in Brighton, so you had people like Anita Roddick who had started from scratch and built these huge empires like The Body Shop, which was nearby. My sister, my grandmother, and several other relatives started their own businesses so it seemed very natural to me. When I was little, I would make little handwritten magazines out of paper, and then in my teens I made home-made magazines and sold them at gigs.
My true passion is bringing ideas into being, and though I’ve always done that to a certain extent – I have made a lot of video game mods for example – I really connected with it when we had an innovation competition at work and I felt like, this is it! This is what I need to be doing. A few years before that, I had been working as a PA to a C-suite director of strategy, and I was taking notes. So, the first time I got to actually say how I would develop a new product, I knew that I could do this, and that I loved doing this. You know you’re in the right place when you feel fully awake when you’re doing it and doing anything else feels like being asleep.
My mentor at the time, Alistair Starling, suggested we should start a company together, which resulted in Follow Me Post, but then he landed a high-pressure job that meant he had to drop out, though he’s still around in an advisory capacity. We were both just really sick of missed deliveries.
What does being an entrepreneur mean to you?
I’m entrepreneurial, but I wouldn’t call myself an entrepreneur because of a very macho myth that is perpetuated where you have to risk everything and you’re not doing it right if you don’t.
I found the stories I wrote about in Last Mile really interesting: there was one company that blew £48 million and almost went bust and ended up in much the same position as another company where the guy just started with one customer, then two, then four, and spent nine years growing this network. I’m definitely following the latter’s model, and it’s definitely a long-term game. Most companies fold within the first year, but it takes about eight years to hit anyone’s radar. The developer of Minecraft had a day-job for the first seven years.
The way I’d admit to being entrepreneurial is that when someone shows me a problem, I usually have an idea for a new product or feature, and some idea how to test whether that would work. Everyone is someone’s go-to person for something, like I have one person to go to for emotional support, another for information, and so on. People come to me for solutions.
What is your favorite type of music?
I like music with strong rhythms, usually in minor keys, and I like lush walls of sound and strong vocals. I’m currently listening a lot to Kendrick Lamar, Gary Numan, and my perennial favourites Cardiacs.
Who/what most inspires you?
(Soundtrack composer) JG Thirlwell, and people like him. When he was on (British music show) The Tube back in the 80s, that was just him alone – but he played every instrument, wrote and recorded it himself. He even did his own record sleeves, and the art’s so good they’re hanging in galleries. He set up his own record label, did his own publicity, everything, and ended up inspiring bands like Nine Inch Nails. Similarly, film-makers like Sam Raimi, who made the low-budget Evil Dead, and Jennifer Kent, who made The Babadook through Kickstarter, inspire me. They show how you can operate within constraints and still do something really amazing. In terms of founders, Luis von Ahn (Duolingo) and Elon Musk are the obvious ones, because they just tear up the rulebook.
I’m fortunate to have had some pretty incredible people to take me under their wing – like Everett True (who writes for the Guardian), and edtech guru Geoff Stead, who’s now at Babbel. I’m part of some great founder networks, such as Blooming Founders, led by Lu Li, and BAMF, led by Josh Fechter, and those networks are about more than practical advice and contacts – we keep each other motivated and inspired.
I also really love the energy and enthusiasm of Carryr founder Chris Jordan, who wrote Last Mile with me. He has amazing levels of confidence and tenacity, and – of course – great ideas.
Anything else you'd like to add?
We wrote Last Mile: How Startups Solve the Challenge of Delivering to Your Door to help people thinking of starting their own retail or delivery company to see what research was out there and what other people’s experiences have been. The big secret seems to be to keep costs low and put things in front of customers early and often. But if there’s one thing I’ve learned, it’s that anyone can do anything if you just get out there and do it.
Follow Me Post 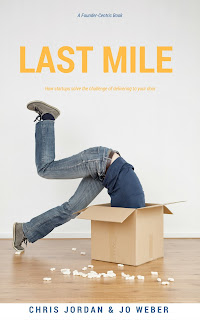 -How did you get into writing? Each of us dived into writing from a different angle. Breakfield was Editor and Writer for school newspaper which was very controversial. Additionally, the faculty advisor for the paper was willing to allow this to go unchecked. Sales soared and popularity for each next addition spurred more creative reporting and editorials. Burkey wrote poetry for a while. She gave that up when she became way too serious and began writing technology white papers. From there to technical manuals where she worked with Breakfield. Then they both had an epiphany and decided fiction would be far more fun, especially when they could weave their technology expertise into some amazing stories. Nine books in the series with number 10 in the works.

-What inspired this book? The inspiration for writing The Enigma Dragon came from looking at how people today can potentially operate as bad actors but stay off the grid. Technology today is so pervasive and perhaps embedded into the DNA of our young, that the leap of the how and the why dark net types would want to minimize their exposure became the focus. Each story in the series has a focal point and Dragon is hiding in plain sight in our digital age.

-Tell me a fun fact about yourself. Breakfield is a techno-geek who is also a master craftsman with wood. He constructed a beautiful golden oak dining table, almost five centimeters thick, a meter plus wide and nearly 2 ½ meters long with graining that matches and makes it appear as a single piece of wood. Yep, it’s heavy. Burkey loves to sew a lot. She was honored when asked to create an original maroon formal for a serious contender of a Miss Texas Teen USA pageant. The dress consumed almost 20 meters of satin and three rolls of thread. It took 4 conference room tables to cut it out, roughly 40 hours to sew, and fit like a glove with a swirling skirt as the contender appeared to float when walking.