The Truth About my Guitar Lessons

As you may know if you are connected with blog/social media, I have just started guitar lessons!

I started guitar class yesterday so what'd the awesome @carpetmavenllc do? Got me these awesome rockstar sunglasses! #guitar #music #rockstar #sunglasses #fun #rock #rockandroll #star #thankyou
A photo posted by Morissa Schwartz (@morissa_schwartz) on Jun 23, 2016 at 9:09am PDT

It all started because I won a guitar in a Jonas Brothers (JoBros as true fans called them) contest a few years back (feel free to chuckle). The contest went like this: I sang one of the Jonas Brother's songs, Paranoid, for "Girl's Life Magazine," made a music video, and it got two million votes, which won me the guitar.

Girl's Life has since taken down the videos (I am not complaining haha), so here is a photo with no explanation of the Jonas Brothers on a weather map, because of course.

That was a total highlight of high school for me. I mean can you imagine being a high schooler and something happening like that to you? Truly a dream. So because of that, I was less concerned with the actual prize and more so excited about my success in the contest and of course, the Jonas Brothers, who were like the biggest group in the world at that point. The guitar was just an added bonus then.

But now that I am more grown and the shock of the contest has worn off, I was left with this really cool guitar. I decided that rather than just letting it sit there, I would cross learning to play guitar off of my bucket list. So, I started taking lessons at a local college. I am the only person in the class with an electric guitar, but it's really fun.

I'm as big a Nirvana fan as anyone, but I just could not use this unsettling pick of Kurt's face staring at me. Haha. #nirvana #kurtcobain #guitar #guitarpick #guitarist #music #play #haha #laugh #grunge #90s
A photo posted by Morissa Schwartz (@morissa_schwartz) on Jul 28, 2016 at 7:22pm PDT


I am four weeks into it, and have not only learned how to make the guitar produce non-ear shatterring sound (which I never thought would be possible), but I learned a few songs (and I am working on making them listenable, so stay tuned for cover videos!). And now I am on a new part of the class where we are focusing on rock, which is pretty awesome in my book. Yesterday, we learned some basic jamming techniques; now that's really rocky.

So I do not have my guitar stuff yet (amp, cord, tuner...basically everything you need to properly operate a guitar), but we learned the basics of 'Lean on Me' in class last night and while I was practicing I figured I'd share some of that. #leanonme #beginnerguitar #guitar #music #cover #singer #fun #laugh #rock #billwithers
A video posted by Morissa Schwartz (@morissa_schwartz) on Jun 23, 2016 at 3:29pm PDT


I am now looking into guitar equipment to help me maximize my sound and am loving Function f(x),dedicated to designing and producing exceptional guitar effects pedals for tone enthusiasts and experimenters. Our goal is to provide customers with reliable and aesthetically pleasing musical devices that deliver outstanding tone in any performance, studio, or home setting. Current products are: Clusterfuzz and Third Rail Overdrive. Coming to market soon: Parallax (combination tremolo and phaser). 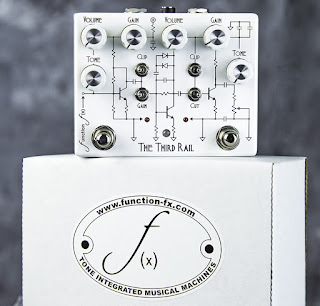 So any fellow guitarists out there, definitely check out those awesome people. They also have ties to Drew University (my alma mater), so you know they're awesome.
at July 29, 2016